The cats and their human

August 6, 2012: Has it really gone 3.5 years since I wrote about my cats? And then when I do it it's to tell you something very sad. Which is that my beloved Emil died May 8, after being ill for just a few days. I found out that he was ill a Sunday, Tuesday I had to put him to sleep. I haven't just been able to write about it until now. Ida misses him a lot, she still searches for him now and then. The first two weeks after he died she tried to hinder me from going out, by grabbing my clothes, I guess she was afraid that I would go out and never come back, just as Emil did. It's a bit better now, but she is clearly much more attached to me now. She sleeps in my bed almost every night, which she never did before and stay much closer to me than she did before. Right when I'm writing this she lies as close to my legs as she can. She talks a lot also, a lot more than before, sometimes a bit too much. But I'm happy to still have her and I hope she will become very old. She is now about 4.5 years old.

Here is one of the last pictures I took of Emil:

January 9, 2009: Ida was spayed in June 2008 and when she had recovered she became a totally different cat. I have never had a spayed female cat before so I didn't know what to expect. Before, as I've written below, she was a little cat with an attitude and sometimes quite mean to Emil. I think he was quite tired of her sometimes. But now she is a cuddly grown-up cat, she loves to be kissed on the forehead, sleep on my legs or beside me and she is much nicer to Emil. When I get guests, she comes to greet them and to get patted, something she never did before. Friends that hadn't met her for a while since before she was spayed, was quite amazed and asked if it was the same cat!!! She still has attitude (she is a female!) and makes it very clear what she likes or dislikes, but in all she has become a lovely cat which fits in well here.
Here are a few pictures taken the last months: 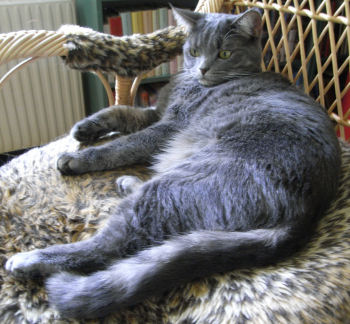 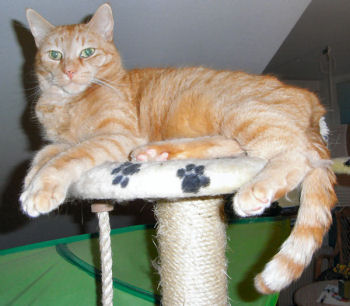 June 20, 2007: After Kasper's death, Emil became very depressed, he wouldn't play, cuddle and ate very little. He missed his brother so much, they had been together since the day they were born. I hoped that he would get over it, but it just became worse. I didn't recognize my happy, playful, cuddly Emil anymore. So after much consideration I decided to get a new friend for him. Not to replace Kasper, because that wouldn't be possible, but to get someone to ease his mood and to play with . I searched all over internet to find a male kitten but for some reason all kittens within reach were female! At last I managed to find a male kitten, the last one in a litter. He had been "booked" but the future owner had changed his mind. So I told the seller that I wanted the kitten. The day after the seller phoned and said that they had done a mistake about the sex of the kitten, it was a female! sigh! But I had said I wanted the kitten so I said that it was OK. So today she arrived. A little lady with an attitude! 10 minutes after the arrival, this minute kitten walked up to 13 lb heavy Emil and slapped him! He was looking at her... And so it has continued, she rules the house, Emil and me. An ironfist in a velvet glove (with claws), she terrorizes Emil and bites him so he screams, and he is too kind-hearted to tell her off. Then after she has bitten him, she tells him that she wants to be washed by him (she moves her head under his chin) and kind as he is he does it. When she thinks it's enough she "thanks" him by biting him again! Her name is Ida. Her mother is a purebred British Blue, her father (probably) a gray & white European shorthair. Her colors are blue and cream. Here is a photo of her, taken the day after she arrived: 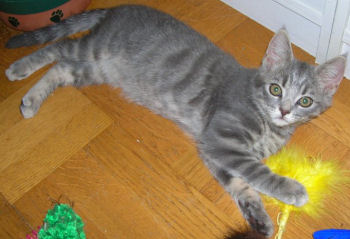 And here you see the size difference between Emil (the orange cat) and Ida: 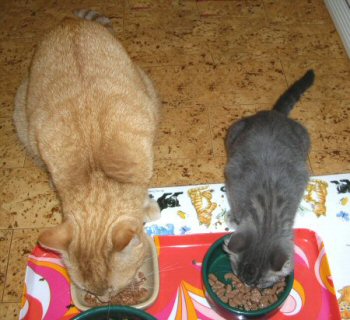 May 3, 2007: I'm sorry to have to tell that one of the two brothers below, Kasper, died Wednesday April 25. I had to put him to sleep, he had in just a few weeks developed a kidney disease which was so bad so there was nothing else to do. He wasn't in pain but he probably felt very weak, and he had stopped to eat. He was just 4.5 years old and I had thought his brother Emil, Kasper and I would have many more years left together. But life is unpredictable... Both Emil and I miss him so much, one-third of our little family is gone. Here is a picture of him, taken just a few days before he died: 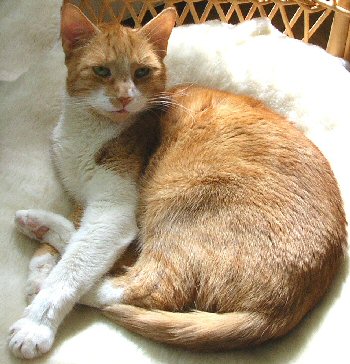 February 17, 2003. May I introduce my newest owners! Meet Emil and Kasper, brothers from the same litter. They were born December 1, 2002 and came to their new home and human today. The day after they came I took this picture:

Since then they have grown...a lot! Now each of them weigh about 6.5 kilo (that's 14.3 lbs)! They will turn 3 years old about one week from now (December 1, 2005). Kasper is a little thinner than Emil...but not much. It's about time that I put in a new picture of them (the last time I did that was in 2004). Here is a photo of them, taken April 29, 2005. I happened to have the camera nearby when they was laying on the floor in almost the same position.

Emil was cuddly from the start but for Kasper it took some time to trust me. But now they are almost fighting sometimes to be in my lap. Emil loves to be kissed...Kasper hates it (but tolerates it if he is sleepy..). Emil is the straight-forward one who climbs into the arms (or lap) of new visitors after just some minutes (if they pick up Kasper he wrenches himself loose after some minutes after sitting in their lap or arms looking like someone is doing him harm...), he is first when it comes to examining new things: food, smells, machines...whatever. Kasper always comes a step behind, watching his brother's reaction first. But Kasper have one big advantage over Emil (which he is VERY proud of): he is a climber! He loves climbing in my bookshelves in the workroom (former bed room) and sit on the top shelf...while Emil sits on the floor and look envious. Emil can climb..if he wants to. But he is a little bit heavier and bigger so well...it's too much hard work he thinks.

Emil is big now..and will be even bigger I think. His head is rounder, his paws bigger and his tail is 3.5" (9 cm) longer than Kasper's tail! Kaspers head is more triangular, his whole body is slimmer and he doesn't gain weight as fast as Emil. Emil is mostly the dominant one, so I have to stand and watch while they are eating. Otherwise Emil turns to Kasper's bowl after a while, to check if that food is better (which it isn't, it's the same food) and then Kasper just walks away without protesting. So I have to stand beside and tell Emil to stay at his own bowl until Kasper has finished eating. But when they fight or play it's sometimes Emil on top, sometimes Kasper, so Kasper is in no way a meek, weak cat. He can bite his brother just as hard as his brother can bite him ;-) and though Emil has the advantage of being heavier, Kasper is more flexible and moves easier.

I hope we will get many years together: Emil, Kasper and I, and look forward to learn to know them even better and to follow their development. Kittens are cute..all kittens are, but in my opinion grown cats are more fascinating. To be able to see how they develop their own personalities, to learn to understand what they say with sounds and body...that is the big adventure! 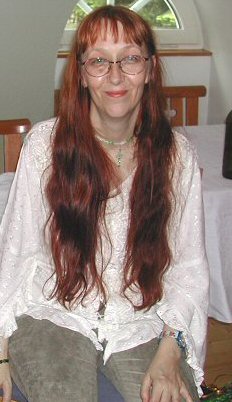 Hi, I am Susann, creator of these pages. Yes, my hair is dyed...just so you don't have to wonder! But since I've used the same brand and color since I was 15 it feels like my real color. I was born in May 1953, so count on your fingers to figure out how old I am now! I think life is rather fun and I have a lot of interests. I feel just as comfortable with an electrical saw as an embroidery needle, I like all kinds of crafts and always get interested in new ones. I like to read a lot too and of course to sit in front of the computer. I have been connected to internet for about ten years now and am constantly learning new things and meeting new friends. I had a motorcycle but traded it in August 2008 for a so called "EU-moped" (EU=European Union), a moped which can't go faster than 45 km/hour (28 miles/hour) but that's enough for my short trips around Ängelholm. I don't have any photo of it yet, so you will still have to look at me on my motorcycle: 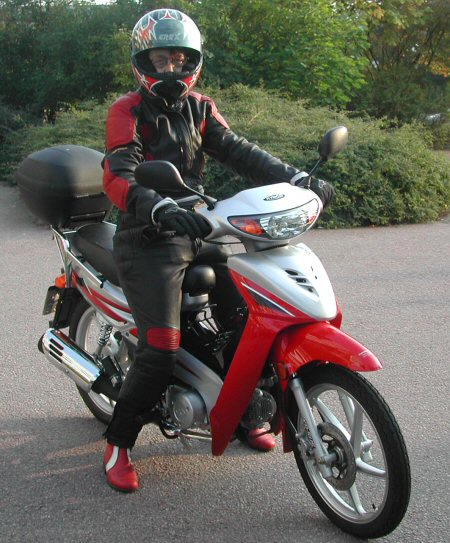 I have early retirement pension due to illness (chronic pain because of endomethriosis plus a few other diseases) so I'm mostly at home. Thanks to the time-differences (but sometimes I curse it...) there's always someone awake when I can't sleep because of the pain. Sweden is 6-9 hours "ahead" of USA, how much depends on which part of USA. For example, if the time here is 6 pm (6 in the evening) it's 12 am in New York and 9 am in California. At the same time it's 3 am (the next day) in Australia and Japan! So if you email me and don't get an answer right away, that could be one of the reasons. To me internet is a way of meeting new people, a place to discover new interests and to be able to get supplies for all the crafts I do, a giant encyclophedia...and a lot of other nice things. Yes, there are less nice places to on the internet..but I just don't visit them. So come on, get out on the net, maybe we'll meet there!

I WILL ALWAYS REMEMBER: 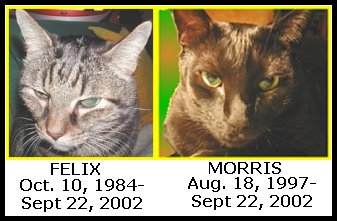